Micro Mars is a game that began development during the last few days of My First Game Jam, Summer 2018. If you're reading this in the summer of 2020, congratulations: the world is still turning.

The original idea to make game for the Game Jam during the last few days seems little silly from the outside. We knew whatever we made would be rough.

Eric Karoulla is quite new to making games, though he's been writing since before he could run. Am I being hyperbolic here? maybe. But he REALLY likes writing.

Maki Yamazaki has been coding since the days of yore, but only became serious about it over the past few years. For the past year she's been writing her fourth game engine.

At first, it was simple: Eric had 5 days to make a game in Ren'py, whatever the quality. Simply getting something out there is awesome. But he had a tonne of ideas that were going to be hard to do in Ren'py. So on day 2 Maki, has the ludicrous idea to write a game engine for it... IN THREE DAYS.

We should have called this game 'ONE HOT MESS' because that's what it was like making the damned thing. If Eric was going to fail, Maki wanted to go down with the ship too (friendship is awesome).

Writing this in the early hours of the morning and looking back, we had a TONNE of fun. 100% would do it again, YOLO.

We both did a lot of things we'd never done before and we both definately want to continue developing this game.

Apologies that there is only a mac version: when you write a game engine in 3 days, porting to and testing on other platforms is usually the last thing you want to worry about. The good news is though, that we're definitely looking at doing that in the near future.

The game was coded by Maki in C++ using the SDL2, SDL2_ttf, SDL2_image and SDL2_ttf frameworks, plus some standard C/C++ libraries.

Almost all of the text was written by Eric.

The font used, called 'DigiLove', was made by Maki. During the game jam, she added Greek support, even though the game ended up without any greek in it at all.

The file icons were a very last minute addition by Maki.

All sounds were designed and recorded by Maki... and we were both thrilled that the sky decided to pour down on Maki whilst we were making this game.

Best enjoyed in a dark room with no distractions. 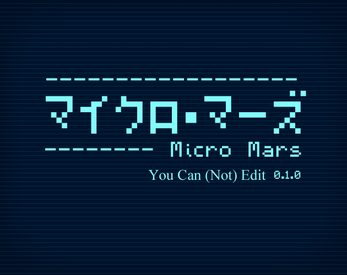 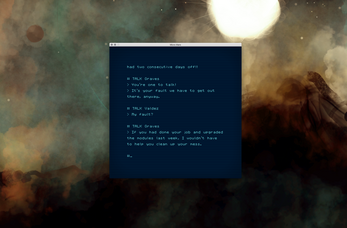